Justin Trudeau, Judicial Corruption and the Supreme Court of Canada: Aliens and Archons in Our Midst.

Justin Trudeau, Judicial Corruption and the Supreme Court of Canada: Aliens and Archons in Our Midst takes us on a journey from the alleged corruption revealed by former Minister of Justice and Attorney General of Canada, Jody Wilson-Raybould to alien manipulation in the guise of human faces. Such manipulation that has been reported by different reliable sources which include Dr. Michael Salla and the former Canadian Defence Minister Paul Hellyer.

It was John Lash who had documented in Metahistory.org ancient Pagan Gnostic insights of the Archons as an 'artificial intelligence' which is the product of cloning technology.

Have we as humans yet to come in contact with other sentient life forms in our universe as the elites would have us believe?

In mountains of evidence that this is simply not the case, veteran investigative journalist Peter Tremblay who has worked for former Canadian Defence Minister Paul Hellyer, brings together journalistic reports on a co-ordinated and apparent conspiracy among manipulative aliens and their Archon fronts. Such “Archons” appear to operate as "fifth columns" embedded within the police, the judiciary, and other institutions of governance in a similar way that terrorists can operate "sleeper cells" within various organizations.

Through judicial proceedings involving the Carby-Samuels case that have been documented by various investigative journalists who have worked with Peter Tremblay, the operation of aliens through their Archons are revealed. This book documents a path of alien manipulation and intrigue in relation to Dezrin Carby-Samuels along with her husband Horace Carby-Samuels and the efforts of theirson to seek a pursue of his mother’s liberation from apparent Archons.

Ms Carby-Samuels has been subjected to apparent forcible confinement under an apparent regressive alien paralysis which has resulted in her not being able to walk, talk or write anymore.

Peter Tremblay has worked many years in government right up to Minister’s Offices and also with all major Canadian political parties and has observed a pattern of manipulation which seems to subvert our human identity as beings of love, empathy and peace into a context of corruption through a system of justice that this book documents.

As this book reveals, the corruption which played out in the Canadian Justice system through the SNC-Lavalin Scandal between the Offices of the Prime Minister and Minister of Justice is only the tip of the iceberg or a sea of apparent corruption which undermines the desire of Canadians to pursue a society based upon social justice, ethics, due process and the rule of law.

In general, it is apparent that our world has little help to realize a desire of the values of our democracy and the environmental protection as long as these reported regressive aliens are allowed to infiltrate power structures in a manner which conflicts with our values as forward-thinking human beings.

Trudeau and Ball talk Atlantic Accord, Innu children in care during closed-door meeting

A "broad range" of issues were on the agenda during a private meeting between the Prime Minister of Canada and the Premier of Newfoundland and Labrador on Friday.

Before shutting out the media, Justin Trudeau and Dwight Ball had a brief photo op, where they revealed some of what would be discussed.

Trudeau agreed, saying it was a priority to "move forward positively" on the Atlantic Accord discussions.

In a press release issued after the meeting, Ball said the conversations "focused on Newfoundland and Labrador being the primary beneficiary of its offshore resources and the joint management of those resources."

They hope to finalize the Atlantic Accord review by the end of March.

No mention of SNC-Lavalin during speech

Earlier in the day, Trudeau took a tour of Memorial University's core science building, which is still under construction, and gave a speech to Liberal donors at the Alt Hotel in downtown St. John's.

His speech focused on how faith in public institutions is dissipating around the world — he mentioned the United States, France and the United Kingdom, but neglected to mention the burning issue of the SNC-Lavalin affair at home. 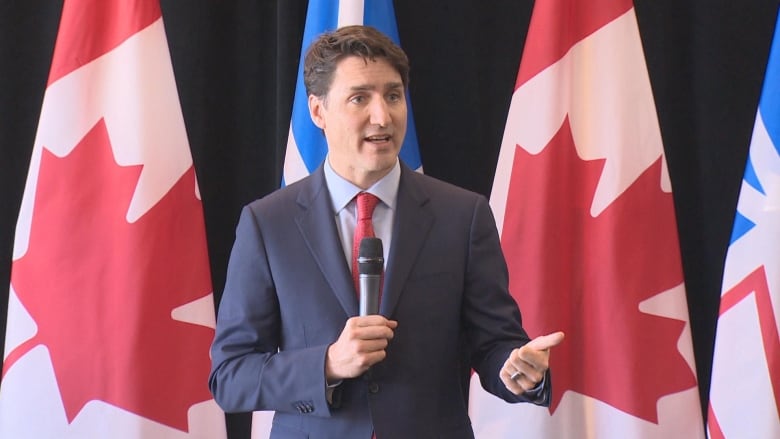 Prime Minister Justin Trudeau gave a speech to Liberal donors during an event at the Alt Hotel on Friday in St. John's. (Danny Arsenault/CBC)

"There's a time right now where people around the world are mistrustful of their institutions, worried that they are not being supported in the transformations of the world around them. And that's causing people and the democracies around the world to lash out in various ways," he said.

Not only did he leave out any mention of tensions in Canada, Trudeau said his government is doing just the opposite.

"What we are doing here in Canada is reinforcing faith in those institutions … governments can't do everything, but what it does do, it should do well."

During the tour at Memorial University, Trudeau was asked about the SNC-Lavalin scandal. He said people should pay close attention to comments made this week by Clerk of the Privy Council Michael Wernick.

"Canadians expect us always to be standing up for jobs, to be making sure that we're protecting economic growth across the country, and indeed promoting it. That is one of the fundamental jobs that anyone expects of their government," Trudeau said.

"But they of course expect their government to do that in ways that respects the rule of law, upholds the independence of our judiciary, and defends our institutions, and that is something that this government has always done."

Playing to a local audience, Trudeau recounted his bachelor party in Newfoundland — when he and MP Seamus O'Regan went seakayaking in a snowstorm, and Trudeau says he got thrown out of the Sundance on George Street.

Muskrat Falls on the agenda

During the tour at Memorial University, Trudeau was asked by reporters about the Muskrat Falls hydroelectric project, which is over budget, behind schedule and the subject of an ongoing public inquiry. He was asked whether or not there would be another federal loan guarantee.

"We will continue to work with the government of Newfoundland and Labrador on ways to ensure that the cost of living is affordable, like we do right across the country," Trudeau said.

"We have given significant loan guarantees to the Muskrat Falls project, which has reduced the cost, but we're always looking to hear directly from the premier on ways we can make sure we're working together to benefit the people of Newfoundland and Labrador." 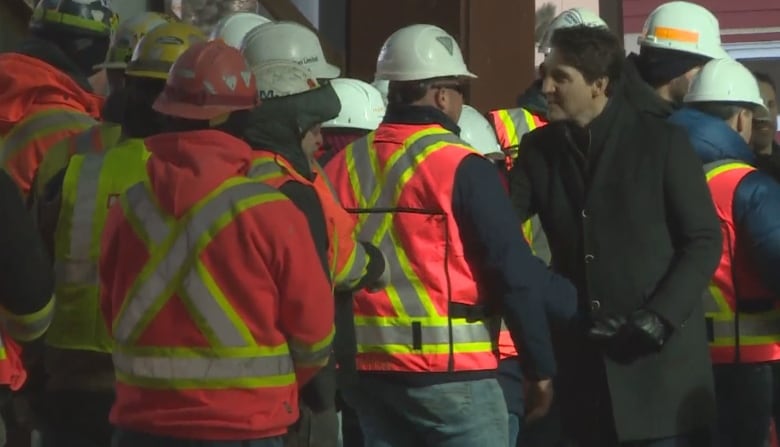 Trudeau was also asked about the Atlantic Accord, as well as a replacement for the aging Her Majesty's Penitentiary. Again, Trudeau deferred to discussions with Premier Ball.

Their meeting convened at 1:45 p.m., with Trudeau scheduled to head to Toronto on Friday evening.

He flew in from Nova Scotia Thursday evening, and the trip to St. John's is, in part, a fundraising stop, as Canadians and politicians get ready to vote in an October federal election.

Though he will be talking with some provincial politicians, Natural Resources Minister Siobhan Coady has said she had "no plans at this point" to discuss the ongoing saga of Muskrat Falls — and any potential financial help from Ottawa — with the prime minister during his brief visit.